Goirigolzarri announces that MicroBank will dedicate €3.5 billion in three years to finance more than 400,000 vulnerable households and micro-enterprises

MicroBank, a leading microfinance bank in Europe, reviews its 15 years of activity and presents its Strategic Plan 2022-2024, ‘Changing lives’ 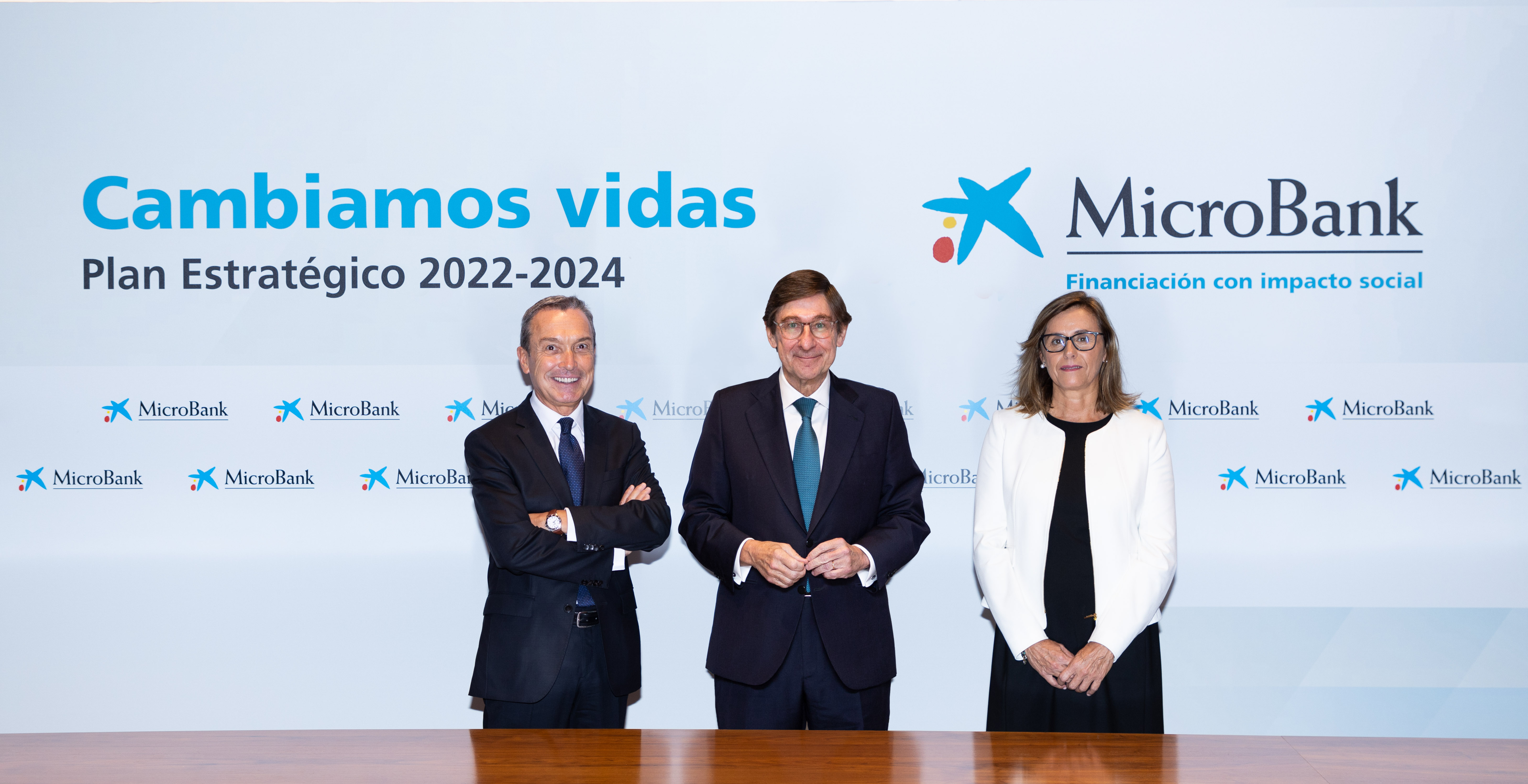 • Since 2007, MicroBank in Spain, through the CaixaBank network, has financed a total of 1,243,332 projects with a social impact with over €8 billion in loans, helping to create almost 293,000 direct jobs.

• CaixaBank's chairman, José Ignacio Goirigolzarri, noted that MicroBank’s goal is to meet the needs of those vulnerable people and social groups whose financial requirements are not sufficiently covered by the traditional financial system. He noted, “This activity is more necessary now than ever, after the pandemic and the Ukraine invasion".

• "At CaixaBank, we have a different banking model, one that's highly inclusive and responsive to the society and the needs of families and enterprises", stated Goirigolzarri, underscoring that "MicroBank is essential to helping achieve this goal".

• MicroBank’s Strategic Plan also focuses on enhancing its leadership in social financing, increasing its impact in the areas where it operates, and creating new partnerships, among other goals.

• MicroBank’s chairman, Juan Carlos Gallego, explained that “the work of MicroBank relies on the unconditional support of CaixaBank, the customers’ trust, the collaboration with an extensive network of social entities, and the contribution of leading European institutions”.

• MicroBank’s Managing Director, Cristina González Viu, announced that the main goal of the company's new Strategic Plan is to promote social financing to support the economic and social growth of the country, and that it “gives us the tools to change more lives, maximise the impact of our work on the society and benefit more people".

Today, CaixaBank’s chairman, José Ignacio Goirigolzarri, announced that MicroBank, CaixaBank's social bank, by the end of 2024 will grant a total of €3.5 billion in social financing with the aim of benefiting more than 400,000 vulnerable families, entrepreneurs and micro-enterprises. The bank’s Strategic Plan 2022-2024 allocates €1.85 billion to households and €1.6 billion to businesses and entrepreneurs.

The commitment to grant €3.5 billion represents an increase of 34% in comparison to the amount granted in the 2019-2021 period and substantially increases the number of beneficiaries, from almost 312,000 in the previous Strategic Plan 2019-2021.

“The granting of microloans is the best contribution we can make to support our country's socioeconomic recovery and contribute to the well-being of the society”, CaixaBank’s chairman stated, while emphasising that “this activity is more necessary now than ever, as after the pandemic and the Ukraine invasion, there are growing social gaps and inequality, that need to be faced".

Reaching those high figures in support of the society is the first goal of MicroBank's Strategic Plan 2022-2024, which, under the 'Changing lives' slogan, is also focusing on enhancing its leadership in social financing, heightening its impact in the areas where it operates, creating new partnerships, and consolidating its management and corporate culture model.

In an effort to pave the way for social financing leadership, MicroBank will work to develop and expand its value proposition, promote better customer experience, explore new sources of revenue and expand agreements with leading partners. In parallel, it will also promote omnichannel services and operations, in order to facilitate and streamline the financing and the social impact of its activity.

José Ignacio Goirigolzarri stated that MicroBank is “essential to CaixaBank's social vocation, underpinned by its unique banking model, one that is highly inclusive and close to the society and the needs of families and enterprises".

“MicroBank has become a true benchmark in the social impact investment, as the largest bank for microloans in Europe”, Goirigolzarri highlighted.

"Today, we are taking the next step in this social work by presenting MicroBank's Strategic Plan, with the goal to meet the needs of those vulnerable people and groups whose financial requirements are not sufficiently covered by the traditional financial system", he added.

Goirigolzarri noted how since its inception in 2007, MicroBank has provided over €8 billion in financing, helping one million vulnerable families and 225,000 entrepreneurs and micro-enterprises.

For his part, MicroBank’s chairman, Juan Carlos Gallego, explained that “the work of MicroBank is based on four pillars: the unconditional commitment and support of CaixaBank, the confidence of customers, collaboration with an extensive network of social entities, and the contribution of leading European institutions dedicated to promoting entrepreneurship. These pillars have made it possible to forge and consolidate an activity model that offers fruitful and measurable results".

Juan Carlos Gallego added that the bank's activity is focused on “granting microloans to families so they can pay for specific needs; on granting microloans to entrepreneurs and micro-enterprises so they can start or consolidate a business, and on social financing, through which we support entities and enterprises associated with sectors that have a social impact, such as the social economy, health, education, innovation and more".

Cristina González Viu, MicroBank's Managing Director, assured that “the new Strategic Plan gives us the tools to change more lives, maximise the impact of our work on society and benefit more people, while remaining faithful to the philosophy that has guided us throughout our 15-year history. We are also very aware that despite our unique business model, we are in a constant process of adapting to the changing environment so we can provide the best service possible".

“When we started working on the Strategic Plan, we were in a post-Covid phase, which was later compounded by the war in Ukraine, the energy crisis, inflation and rising interest rates", detailed Cristina González, who stated that “all these circumstances lead to more inequality in the society, which we are attempting to combat through microloans and social impact financing".

While the first pillar of the plan seeks to help more than 400,000 beneficiaries of microloans, the second focuses on increasing the bank's positive impact on people and society as a whole, as well as on creating alliances with social entities and European institutions that can contribute to achieving this goal. The main areas of work will focus on increasing MicroBank's efforts to be a benchmark in social impact and sustainability. These areas include working to improve the employability of people who need it the most, and to reinforce the productive system, while continuing to implement the policies of the United Nations’ 2030 Agenda.

MicroBank, as part of its ongoing commitment to serve the society as efficiently as possible, will also prioritise the consolidation of an internal management model so that it can adapt to the reality of each moment.

With this intention, CaixaBank's social bank will work to consolidate the management model in a way that is innovative, open and accessible, that guarantees its financial sustainability with the purpose of ensuring the fulfilment of its social objectives, and reinforcing the commitment and service of the people who work at MicroBank through the corporate culture plan.

15 years of social impact by the numbers

The bank, which this year celebrates its 15th anniversary, has provided over €8 billion in financing in Spain for a total of 1,243,332 social projects. Of this amount, almost €7.5 billion was in microloans. This activity has helped to create 292,678 direct jobs through the businesses and self-employed individuals who have received a microloan.

Of all the microloans, 1,000,131 of them, worth €4.93 billion, were allocated to deal with the specific needs of families, while 225,049, totalling €2.55 billion, were granted to support entrepreneurs and micro-enterprises.

While MicroBank has helped to create 292,678 direct jobs since its inception 15 years ago, in 2021 alone it helped to create 17,007 jobs, according to a study on social impact prepared by KPMG Advisors and Stone Soup Consulting.

In 2021, the businesses supported by MicroBank contributed €3.59 billion to the Spanish economy , which is equivalent to 0.3% of Spain's GDP. Of that amount, €1.78 billion was contributed directly, and €1.81 billion through indirect or induced means.

MicroBank offers solutions to different segments of the population whose financial needs are not sufficiently met. It has a crucial role in the Sustainable Banking Plan, which is part of CaixaBank’s new Strategic Plan, which entrusts it with promoting financial inclusion by providing vulnerable groups’ access to loans, as well as with enhancing its commitment to the country's socio-economic development.

As the sole shareholder of MicroBank, CaixaBank has supported its social bank since its inception by providing it the funding required to grow its lending activity while marketing MicroBank products through CaixaBank's extensive commercial network, with the aim of offering customers its entire range of products with the highest possible quality of service and proximity to clients.

More than 290 entities throughout Spain actively collaborate in the granting of microloans, by providing knowledge on the beneficiaries of the loans, advising and following up on the projects.