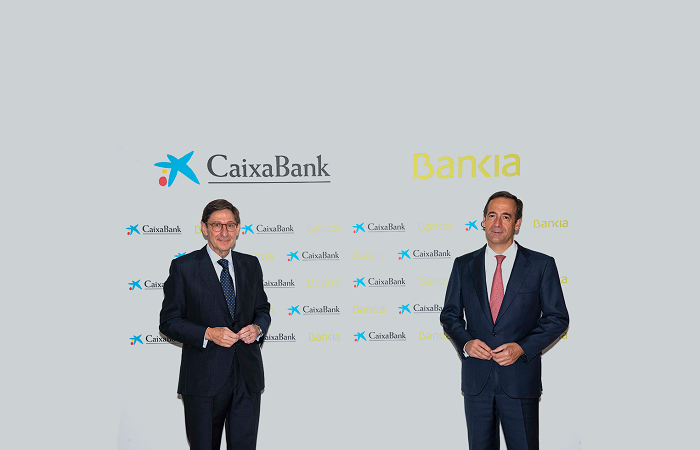 • The Boards of Directors of both entities have approved the operation, to be executed as a merger by absorption of Bankia by CaixaBank, which must be approved at the General Shareholders’ Meetings.

• The agreement consists of an exchange ratio of 0.6845 new CaixaBank ordinary shares for every Bankia share and includes a 20% premium over the exchange ratio at the closing of 3rd September.

• The new entity, which will maintain the CaixaBank brand, will be the leading bank in Spain with more than 20 million customers, a 25% and 24% share in loans and deposits respectively, and a diversified and balanced geographic presence.

• José Ignacio Goirigolzarri will be the executive chairman of the entity, with Gonzalo Gortázar holding the position of CEO.

• José Ignacio Goirigolzarri has remarked with this operation, we will become the leading Spanish bank at a time when it is more necessary than ever to create entities with a significant size, thus contributing to supporting the needs of families and companies, and to reinforcing the strength of the financial system”. "The new entity will continue to carry out the best corporate governance practices".

• Gonzalo Gortázar stressed that "the merger will allow us to face the challenges of the next 10 years with greater scale, financial strength and profitability, resulting in greater value for our shareholders, more opportunities for our employees, better service to our clients and a greater capacity to support Spain’s economic recovery."

• The Board of Directors will be made up of 15 members, of which 60% will be independent. Women will represent 33% of members.

The Boards of Directors of CaixaBank and Bankia have approved the plan for the merger by absorption of Bankia by CaixaBank, which consists of an exchange ratio of 0.6845 new CaixaBank ordinary shares for every Bankia share.

The operation signifies the creation of the leading bank in the Spanish financial system, one with a widespread and balanced territorial presence and the resources and capacity to face the challenges of the industry.

The new entity, which will maintain the CaixaBank brand, is to be founded with the aim of adding value to customers, improving profitability for shareholders and continuing to support Spain's economic recovery.

Once the due diligence process has been completed by both entities, and the plan for the merger by absorption has been approved by both Boards of Directors, the next step requires both Boards’ approval of the merger reports, as well as the calls for the General Shareholders' Meetings, which are scheduled to take place in November.

The operation is expected to close during the first quarter of 2021, once all the relevant regulatory authorisations are received from the Ministry of Economic Affairs and Digital Transformation, the National Commission of Markets and Competition, as well as non-opposition confirmed from the Directorate-General for Insurance and Pension Funds, the Spanish Securities and Stock Exchange Commission (CNMV) and the Bank of Spain for CaixaBank’s acquisition of significant holdings in a company subject to their supervision.

Details of the operation

If the total number of outstanding Bankia shares that could be exchanged is taken into account, the maximum number of CaixaBank shares to issue in order to meet the merger exchange amounts to 2,079,209,002 CaixaBank ordinary shares, each with a nominal value of one euro, a figure that could be adjusted based on Bankia's treasury stock.

The established exchange assumes that CaixaBank shareholders will initially represent 74.2% of the capital of the new entity, and those of Bankia will make up 25.8%.  CriteriaCaixa, an entity 100% controlled by the "la Caixa" Banking Foundation, will remain as CaixaBank's reference shareholder with around 30% of the shareholding, while the FROB (Fund for Orderly Bank Restructuring) will hold 16.1%.

The remaining shareholding structure of the combined entity consists of 54% free float (shares listed on the stock market), 37% of which belongs to institutional investors and 17% to the retail market.

Morgan Stanley and Rothschild, CaixaBank's and Bankia's respective financial advisers, issued their fairness opinion yesterday in which they concluded that the proposed exchange rate is reasonable from a financial point of view and in current market conditions.

The combined entity resulting from the merger will be chaired by José Ignacio Goirigolzarri, Bankia's current chairman, once he is appointed by the new CaixaBank Board of Directors. The chairman, who will be an executive director, will be responsible for the areas of Secretary of the Board, External Communication, Institutional Relations and Internal Auditing (notwithstanding that this area shall remain accountable to the Audit and Control Committee).

The current CEO of CaixaBank, Gonzalo Gortázar, will continue as chief executive of the resulting entity reporting directly to the Board of Directors, having responsibility for all areas not included in the above paragraph and chairing the Management Committee.

José Ignacio Goirigolzarri has remarked, “with this operation, we will become the leading Spanish bank at a time when it is more necessary than ever to create entities with a significant size, thus contributing to supporting the needs of families and companies, and to reinforcing the strength of the financial system”. “The new entity will continue to carry out the best corporate governance practices.”

Gonzalo Gortázar has stressed that "the merger will allow us to face the challenges of the next 10 years with greater scale, financial strength and profitability, which will result in greater value for our shareholders, more opportunities for our employees, better service to our clients and a greater capacity to support Spain’s economic recovery."

On the other hand, the composition of the entity's Board of Directors has also been defined, which will be submitted for approval at the General Shareholders' Meetings and which will continue to comply with best practice in corporate governance.

The proposed composition of the new Board of Directors, comprising 15 members, is as follows:

Independent directors will represent 60% of the total number of directors and the representation of women on the Board of Directors stands at 33%.

Creation of the prominent leader of the Spanish financial

The combined entity's total assets will exceed €664 billion, a volume that will make it the largest bank in the domestic market, with an important position at a European level and a market capitalisation of over €16 billion.

The new Group will consolidate its leadership in the retail banking sector in Spain, with more than 20 million customers and a top-ranking market share in all key products: deposits (24%), loans (25%) and long-term savings products (29%), which includes savings insurance, investment funds and pension plans.

As a result, the bank will achieve a balanced and diversified geographical presence, with the most extensive and specialised network of branches in the sector, and a continued commitment from both CaixaBank and Bankia to maintaining the close relationship with the regional territories and to supporting financial inclusion. The combined entity will have presence in approximately 2,200 municipalities, and it will be the only bank operating in 290 of them.

The network's capillarity, together with its digital capacity –10 million digital customers in Spain–, will enable the bank to continue enhancing customer experience.

This operation is a project that will create value for customers and shareholders by increasing levels of efficiency and profitability, stemming from an excellent and highly diversified customer base, both geographically and in terms of activity, with access to the best product and service offering and a unique distribution platform.

The operation will generate new forms of income following the renegotiation of agreements entered by Bankia in the insurance sector and thanks to the ability to offer a wider and better quality portfolio of products and services to a larger customer base. Over a period of five years, the combined entity is expected to progressively generate revenue synergies amounting to €290 million annually.

Furthermore, its estimate points towards achieving annual recurring cost savings of €770 million (fully achieved by 2023), which will considerably increase the cost-to-income ratio up to highly competitive levels (pro forma cost-to-income ratio of 47.9% at 2019, including the full synergistic effect).

A sector reference in terms of balance sheet quality

Following additional write-downs resulting from the operation, the combined entity will show the lowest non-performing loan ratio in Spain of 4.1%, and a comfortable coverage of 64%, one of the highest among the main Spanish banks.

Moreover, CaixaBank's and Bankia's solid equity position will provide the capacity to absorb restructuring costs and valuation adjustments, with the combined entity achieving a CET1 ratio of 11.6%, which is a very broad margin –310 basis points– above regulatory requirements. Its strong liquidity position (€128 billion), which will continue to be the entity's hallmark, will aid economic recovery through credit growth.

The generation of synergies will improve the expected return, with a RoTE estimated by market consensus of above 8% in 2022. 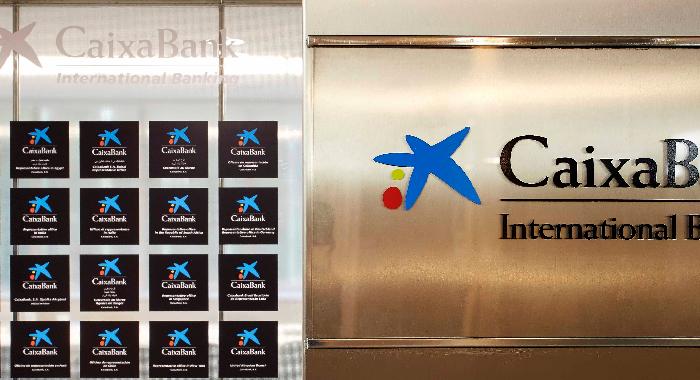 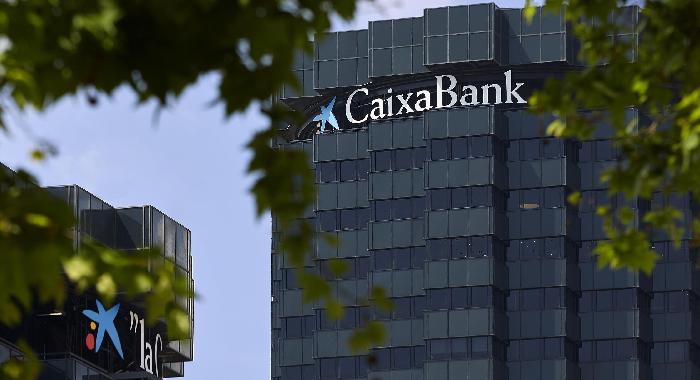