• Global Finance magazine has once again recognised CaixaBank for its excellence in the use of new technology to improve customer service and for the success of its technological integration following the merger with Bankia, the largest in the history of Spanish banking.

• CaixaBank has received this award four times in the last five years.

For the second year in a row, CaixaBank, Spain's leading bank, has received the award as “Most Innovative Bank in Western Europe” at Global Finance's The Innovators 2022 awards. These awards, now in their tenth year, recognise institutions for their ongoing technology innovation in the design of trailblazing products and services in the global banking sector. CaixaBank has received this accolade four times in the last five years.

In the selection process, the jury —comprised of the magazine's editorial board— received  advice from the magazine's journalists specialising in banking innovation. According to Joseph Giarraputo, publisher and editorial director of Global Finance: “The past two years have clearly proven the importance of adaptability and innovation. Banks and fintechs played a central role in maintaining economic stability, and those that were most innovative were the most successful. We proudly recognize the innovation leaders that are forging the future of finance”.

Global Finance is a monthly magazine founded in 1987, with headquarters in New York. It distributes 50,000 copies and has readers in 190 countries.

The award of “Most Innovative Bank in Western Europe 2022” recognises CaixaBank for its ongoing investment in innovation and its excellence in the use of new technology to improve customer service, including its commitment to the application of artificial intelligence (AI) and data analysis in financial services.

In 2014, the bank became a trailblazer in this field with the introduction of IBM Watson, partnering with IBM in training the system to learn Spanish. The subsidiary dedicated to managing information from a scientific viewpoint, CaixaBank Business Intelligence was created in 2016, , in order to spearhead the use of data analysis and AI techniques to support commercial activity  and respond to client needs.

Today, CaixaBank is applying all the power of AI to develop tools for its advisers and customers, in addition to other strategic goals such as employee training, improving security and customer service with its chatbots, which the bank pioneered in Spain, and using big data analysis and AI to create predictive tools. ,

In 2021, together with the start-up Revelock, CaixaBank developed an AI-based solution to prevent fraud across digital channels. The system detects alterations in customers' normal behavioural patterns and compares them with risk patterns, providing added security to all customers who use the bank's online banking service.

CaixaBank was recognised as the “Best Private Bank in Europe in Big Data Analytics and AI 2021” by PWM magazine (Financial Times Group).

Throughout 2021, CaixaBank continued to improve its products and services. Its online banking application, CaixaBankNow, which boasts 8.2 million active users and an average of 28.2 monthly connections per user, has this year added biometric data to enable facial recognition on ATMs. CaixaBank has also incorporated new financial and non-financial services, and has created the first 360° omnichannel AI-based voicebot that enables transactions such as Bizum transfers and card blocking to be conducted at any time and from anywhere.

Furthermore, CaixaBank is Spain’s first bank to incorporate a WhatsApp based communication channel between advisers and customers, guaranteeing the highest level of security and confidentiality, and enabling the synchronisation of all conversations held through the various customer channels.

The greatest technological integration in the Spanish banking sector

CaixaBank has received this award in a year in which it completed the largest technological and commercial integration in the Spanish banking sector's history in terms of business volume, the amount of data, and the complexity of technological structures. The integration, which has made it possible to unify all the information and operations of CaixaBank and Bankia under a single platform, posed a huge technological challenge, in which 10.4 petabytes of information was successfully migrated, equivalent to 45 times the stored capacity on Spotify or 1.8 billion songs in high-quality mp3 format.

The merger , which was conducted successfully in less time than estimated, minimising the impact on customers and providing full security guarantees, allowed the creation of a system that manages a volume of up to 29,000 transactions per second, over a network of more than 16,000 servers and an infrastructure that provides service to 21 million Group customers, 10 million of whom are also customers of the online channels.

The Innovators awards follow on from another impressive year of awards acknowledging CaixaBank's excellence in innovation. Last year the bank received the award of “Best Bank Transformation in the World 2021” from the British magazine Euromoney, and “Global Innovator 2021” from EFMA & Accenture.

In the field of private banking, CaixaBank was named as “Best Private Bank in Big Data Analytics and Artificial Intelligence in Europe 2021” by the UK magazine PWM (Financial Times Group) and "Most Innovative Private Bank in Western Europe 2022" by Global Finance. 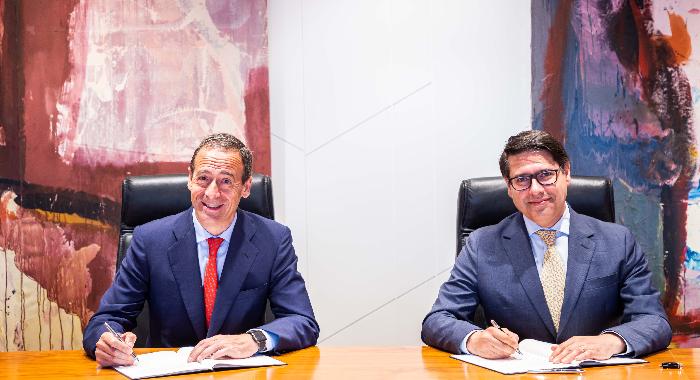