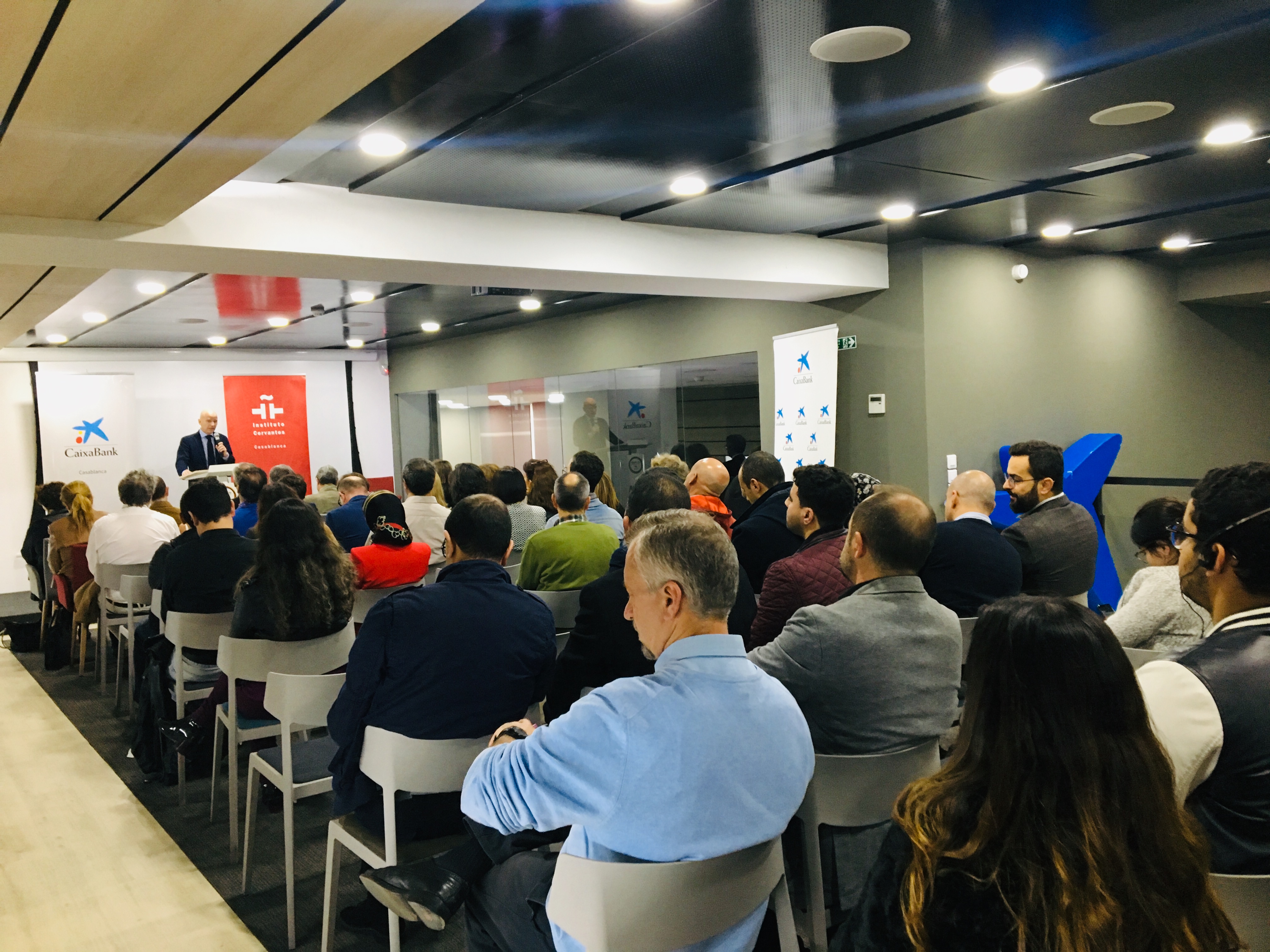 Assistants to the "Le Cercle" forum in Casablanca

• The professor and economist José Luis García Delgado, winner of the Rey Juan Carlos Prize for Economics (2016), has analysed in Casablanca the economic value of the Spanish language.

• This is the first edition of "Le Cercle" that focuses on culture, and it adds to the diversification of these discussion forums, which cover topics as diverse as business management or diversity.

• Morocco is a key territory in CaixaBank's international network. With three branches in the country, the bank is the leading issuer of guarantees for Spanish companies with projects in Morocco, reaching a market share of 60.5% in the first half of 2018.

CaixaBank, in collaboration with the Instituto Cervantes, has held in Casablanca the first “Le Cercle” cultural edition. José Luis García Delgado, a professor and economist that has been awarded the Rey Juan Carlos Prize for Economics (2016) and that currently holds the "la Caixa" Chair “Economy and Society”, has been chosen to inaugurate this cultural forum with a conference on the economic value of the Spanish language.

During the conference, José Luis García Delgado reminded those present that Spanish “is a language spoken by over 550 million people around the world with a buying power that is estimated to be around 10% of the world GDP.” According to García Delgado, these figures have established the Spanish language as “a powerful tool of economic interrelations and business internationalisation for all Spanish-speaking countries.”

This conference is part of the discussion programme "Le Cercle", which was created by CaixaBank as a way to bring together the Spanish-Moroccan business community and strengthen networking between the Spanish and Moroccan business world. This latest edition is the first one that focuses on culture, and it adds to the growing diversification of these discussion forums.

Since establishing this initiative in 2017, CaixaBank has held more than a dozen discussions focusing on topics such as legal certainty and arbitration, energy efficiency, the Moroccan currency, Moroccan taxation, and much more. In July of this year it also included an edition of CaixaBank's “Diversity Talks”, in which the management of key sectors of Moroccan society analysed how women are changing the country.

With the "Le Cercle" programme, CaixaBank has developed its role as a benchmark in project advisory and monitoring and for investments between Spain and Morocco. The bank provides services and financing, mostly to Spanish companies, although large international and Moroccan companies are not to be excluded, through a wide range of solutions and services for foreign trade transactions.

In January 2019 the branch in Casablanca will have been operating for 10 years, during which it has specialised in providing service to Spanish subsidiaries, mainly in the services and distribution sectors. This branch has the know-how of CaixaBank's International Banking division and can offer its range of products.

Morocco is currently the only country where CaixaBank has more than one branch: it has now three, located in Casablanca, Tangier and Agadir. From these branches it provides foreign trade, corporate banking, and business banking services to companies that are already established in the country or that intend to enter the Moroccan market.

CaixaBank is the leading issuer of guarantees for Spanish companies with projects in Morocco, reaching a market share of 60.5% in the first half of 2018.

Apart from the branches that CaixaBank has in Morocco, the bank has 4 more branches in Europe: London (United Kingdom), Frankfurt (Germany), Paris (France) and Warsaw (Poland)

Similarly, CaixaBank holds agreements with international banks, making it easier for companies and individuals from any country in the world to engage in international transactions and foreign trade.

CaixaBank also has a capital presence in the financial institutions of several countries, with which it has developed joint collaboration strategies. The bank also has 94.95% of Portugal's BPI and 9.92% of Austria's Erste Bank.

The Instituto Cervantes is a public institution that was set up by Spain in 1991 to promote and teach Spanish and to spread the culture of Spain and Spanish-speaking countries. It essentially operates within the scope of the linguistic and cultural heritage shared by countries and people of the Spanish-speaking community. It operates in 87 centres in 44 countries spread across five continents. It has two offices in Spain: the head office in Madrid and an office in Alcalá de Henares. With more than 100,000 students a year, the Instituto Cervantes is the largest global institution engaged in teaching Spanish.

José Luis García Delgado, a professor and economist that has been awarded the Rey Juan Carlos Prize for Economics (2016) and that currently holds the "la Caixa" Chair “Economy and Society” in "Le Cercle"
JPG (0.5 MB) 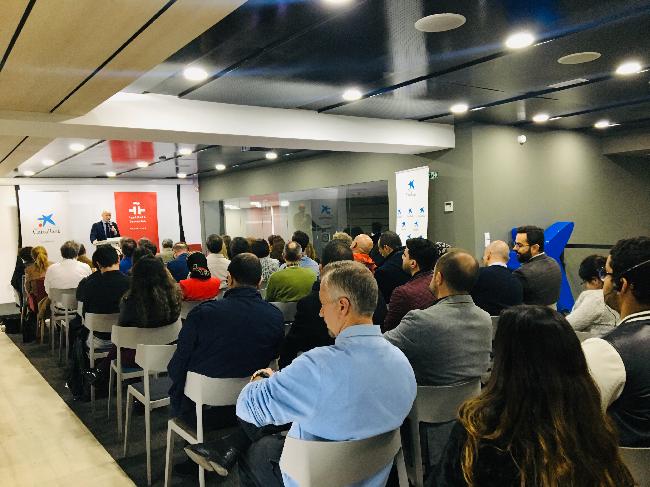 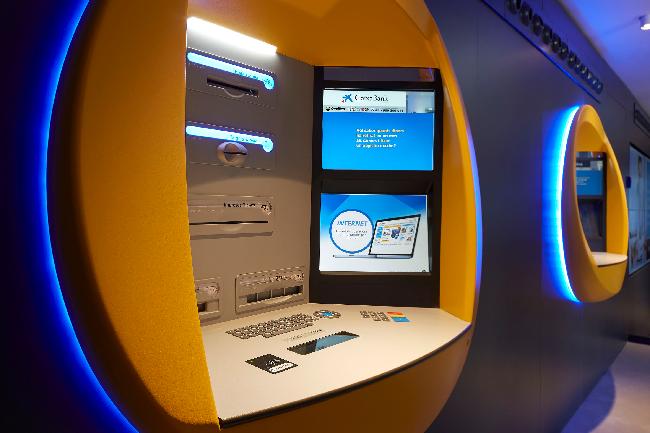 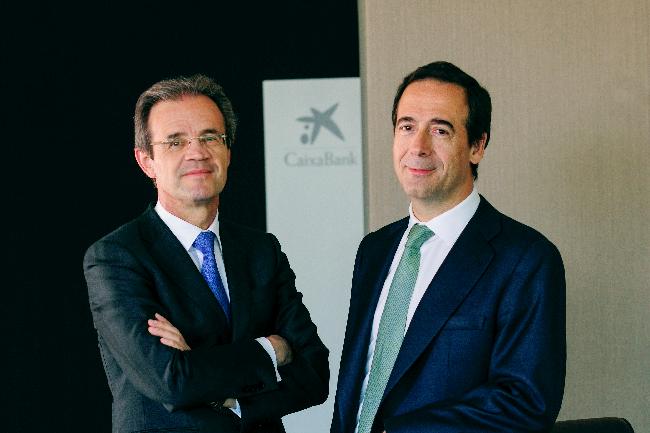