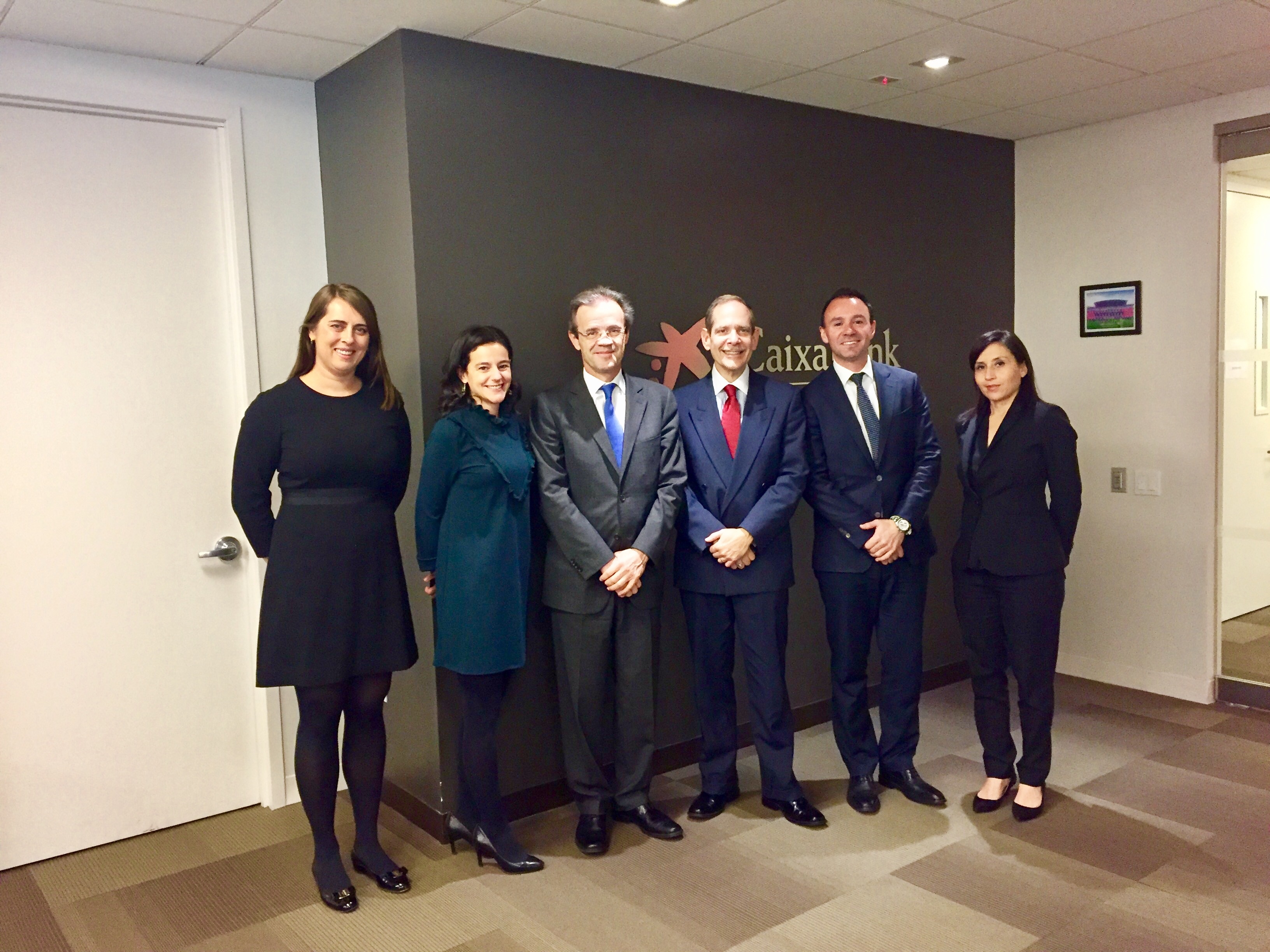 Jordi Gual, Chairman of CaixaBank, with the team of the CaixaBank representation office in New York

As manager of the CaixaBank representation office in New York, I have been living in the Big Apple for two and a half years. During this time, I have had the chance to get to know a highly dynamic, hard-working city with a will to win and no fear of failure, open to opportunities but at the same time demanding and competitive.

The United States offers entrepreneurs high status and greater rewards than any other country in the world. It has public policies, laws, institutional relations and financial incentives to stimulate and support the efforts of entrepreneurs. The United States has been able to take advantage of the opportunities offered by a very solid technology base, excellent human capital and an enormous capacity for innovation.

It is the world's leading economy, accounting for 25% of global output and absorbing 16% of all the world's imports. It is made up of 320 million consumers with a per capita income of 55,837 dollars, is the leading source and destination for international investment and has encouraged direct inward investment.*

While Spanish investment in the United States is something relatively recent, it has already been displaying a favourable trend. After the crisis years in Europe, Spanish companies are now here to stay. Iberdrola, OHL, ACS, Ferrovial, Acerinox, Arcelor and Grifols have an important presence in the country. The United States is Spain's leading trading partner outside the European Union.

In 2017 this market represented the sixth destination for exports of Spanish goods, accounting for 4.5% of the total, and it is Spain's fifth supplier: in 2017 4.6% of Spain's imports came from the United States. Moreover, in 2015 (the last year for which figures are available) the United States was the leading investor in Spain in shareholding terms, making up 14.6% of the total, and it is the second most-important destination for Spanish investment, accounting for 14% of the total.

In infrastructure, the Spanish private sector has a role in the execution of large-scale projects, and in the period from 2013 to 2017 Spanish firms won contracts for works and services in the United States worth around 30,000 million euros.

In export terms, the economic situation in Europe - including Spain - in recent years has represented an opportunity for a considerable group of Spanish firms, which have begun to export their goods and services

Worthy of mention is the growing Hispanic presence in the country, with over 55 million Spanish speakers, more than the population of Spain and the largest minority in the country (17%)*. This offers more and more opportunities for Spanish companies in the fields of culture, publishing and education, among others. Cities like Miami or New York have become financial hubs where repeated meetings are held between banks to discuss the possibilities of financing investments in Latin America. Spain could play an important role here. In a conversation with the president of the United States, Donald Trump, Spanish prime minister Mariano Rajoy offered Spain as an "interlocutor in Europe, Latin America, North Africa and the Near East."

From the legal point of view, the United States market is really 50 markets, each with its own legislation

The size of this market and global competition means that the best resources must be devoted to it, both financial and human. It is necessary to ¨Americanise¨ and seek out local partners as several Spanish corporations - such as Acciona or Iberdrola - have done.

This is a good time for Spanish firms to play an important role in projects in areas like road or rail infrastructures. Public-private partnerships may be another of the options Spanish firms could feel comfortable with. Nevertheless, the finance necessary for these investments must be taken into account. Setting up these projects requires assured funds, according to Deloitte, of around 200,000 million euros a year. The United States is the most heavily-indebted country in the world.

On the other hand, there is less interest in taking on renewable energy projects because of uncertainty over the continuity of tax incentives and new tax policy. There is also concern among exporters due to the programme of protectionist policies and the refusal to sign international trade agreements, which could, through duties and higher costs, harm Spanish firms exporting to the United States.

Despite its debts, the United States is the global shop window

Growth this year will remain high (2.4%), encouraged by the positive trend in private consumption, the consolidation of investment and a slightly expansionary fiscal policy. In 2019, growth will continue to stand at about 2% as a result of internal support factors. **

Companies and products that succeed here have a good chance of succeeding in other countries.  Anybody thinking of embarking on an adventure in the United States should do so on the basis of good advice. Clear ideas and the support of a team of professionals specialised in the region are of key importance to success.

It must be borne in mind that while United States consumers have high purchasing power and in general are very happy to purchase foreign products, Spanish firms need an international strategic plan to succeed on this market.