CaixaBank posts profit of €205 million in the first half of the year after extraordinary loan-loss charges of €1.15 billion in response to COVID-19 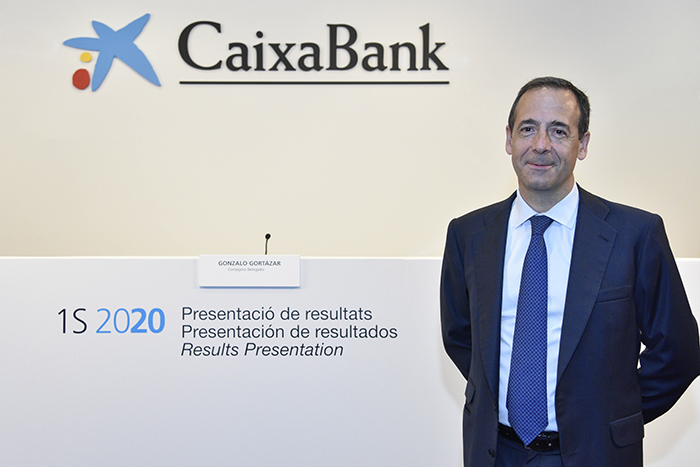 • The Bank reinforces its resilience against future impacts associated with the pandemic, posting a further €755 million in loan-loss charges in the second quarter to supplement the €400 million already posted in the first quarter of the year.

• Supporting the financing needs of the business sector and social commitment. CaixaBank approved a total of 357,488 moratorium requests from its customers in Spain through to June 30, concerning a portfolio worth €9.8 billion. Since the announcement of the state of alarm, CaixaBank has also granted €32.5 billion in financing to the business sector, without counting the ICO (Spanish Official Credit Institute) credit lines, while managing a total of €13.7 billion in loans linked to ICO COVID-19 credit facilities.

• CaixaBank reports record levels of total loans and deposits. Customer funds exceed €400 billion (+4.3% in the year), driven by strong growth in demand deposits. Gross loans and advances to customers stand at €242.9 billion, up 6.8% in the year, largely down to an increase in business lending (+15.9%).

• Continued market share gains across all main products. The Bank’s share of the direct payroll deposits market climbs to 27.5% and it now accounts for 26% of all pension plans and 17.5% of all mutual funds, as well as 16.2% of all loans and 15.4% of all deposits.

• Core revenues remain stable at €4.1 billion (-0.5%), despite the prevailing economic climate and the lockdown caused by COVID-19.

• Reduction in administrative expenses, depreciation and amortisation (-2.6%), thanks to the efforts made to manage and contain the cost base, which will generate savings of over €300 million in 2021, above and beyond the level envisioned in the Strategic Plan.

• Bank liquidity surpasses €100 billion for the first time, growing €17.2 billion in the year following the generation and contribution of collateral to the ECB facility.

• High capital ratios, well above the regulatory requirement. The Common Equity Tier 1 (CET1) capital ratio rises to 12.3%, up 26 basis points in the year, providing the Bank with a comfortable platform from which to continue meeting current credit demand. As for the MREL requirement (22.7% of RWAs as of 31 December), CaixaBank currently has an RWA ratio of 23.3%, with highlights including the issuance of a new social bond this month worth €1 billion.

The CaixaBank Group, Spain’s leading retail bank with Jordi Gual as Chairman and Gonzalo Gortázar as CEO, reported a net attributable profit of €205 million in the first half of the year, down 67% year-on-year following an extraordinary loan-loss charges of €1.15 billion in the first half of the year to cover the future economic impact of COVID-19. A total of €400 million was posted in the first quarter, followed by a further €755 million in the second quarter. It should also be noted that 2019 earnings were affected by the labour agreement (€978 million).

CaixaBank has remained fully operational since mid-March as a supplier of essential services and has remained firmly committed to society and its customers thanks to the dedication of the Group’s more than 35,000 employees. The Bank has continued to lend to businesses and individuals and continues to support those sectors most affected by the pandemic.

During the state of alarm, the Bank kept the vast majority of its branches open (between 85-90%) across 97% of the more than 2,000 towns and cities in which CaixaBank is present. Today, 99% of its network is operational and open for business. It also has the largest network of ATMs in Spain, with 9,000 terminals.

CaixaBank, supporting businesses and all other customers

In the period up to 30 June, the Bank approved a total of 357,488 moratorium requests from its customers in Spain, concerning a portfolio worth €9.8 billion. As a bank affiliated to CECA, CaixaBank has ratified the mortgage and loan moratorium enacted by the Government and has supported the banking sector moratorium by granting an additional repayment period beyond the legal requirement and extending the scope of the scheme to include segments other than the vulnerable customers included in the Royal Decree-Law.

Since the announcement of the state of alarm through to 30 June, CaixaBank awarded €32.5 billion in loans to businesses, without counting ICO credit lines, thus helping large companies, SMEs, self-employed workers and entrepreneurs to cope with the economic impact that the pandemic is having on the productive sector. Since the commercial launch of the ICO COVID-19 credit facilities, CaixaBank has processed over 164,000 loan applications totalling €13.7 billion.

Innovation has been a key driver in achieving this degree of commitment to customers. The Bank is the digital banking leader in Spain, with a 32.9% market share according to Comscore figures, having reached an all-time high of seven million digital customers in June (website and mobile banking). Meanwhile, the CaixaBankNow mobile phone app has now reached six million users for the first time. The Bank has also recently transformed imagin — its mobile-only banking platform for young clients— into a digital platform dedicated to the creation of digital financial and non-financial services for young people.

In this complex landscape, levels of activity steadily recovered during the months of June and July. The Bank has managed to consolidate and improve its market shares across the main products and services, notably direct payroll deposits, mutual funds, pension plans, life insurance and business lending.

Turning to the statement of profit or loss for the first half of the year, core revenues were slightly down in the year to reach €4.1 billion (-0.5%), in spite of the prevailing economic conditions. Net interest income amounted to €2.4 billion, down 2.1% year-on-year. This can largely be explained by the decrease in loan income in response to the reduction in the interest rates applied by the Bank, partly owing to an increase in the granting of ICO credit facilities, a drop in consumer loan income and the fact that the interest rate curve has fallen. This has been partially offset by an increase in lending volume.

Highlights in the period included a year-on-year improvement in fees and commissions (+1.5%), although the slump in economic activity from mid-March onward and prevailing market conditions have affected the performance when compared with the first quarter (-7.5%).

The change in gross income (-7.4%) was down to a reduction in trading income and income from investees, where dividend income included €50 million from Telefonica in the second quarter relating solely to the first approved scrip dividend and €40 million from BFA. Income from investees was down 53.7% year-on-year as current economic conditions have led to a reduction in attributable earnings.

Recurring administrative expenses, depreciation and amortisation were down 2.6% following intensive efforts to manage the cost base. This containment exercise will generate savings of over €300 million in 2021 beyond the figure envisioned in the Strategic Plan. Staff expenses were down 4.6%, with the 2019 labour agreement and the early retirements in 2020 both generating savings and offsetting organic increase. General expenses were also down, falling 0.8% in the year.

Total loans and deposits at an all-time high

Total loans and deposits in the first six months of the year amounted to €643.6 billion, an all-time high for CaixaBank. Gross loans and advances to customers came to €242.9 billion, up 6.8% in the year, mainly due to an increase in business lending (+15.9%).

Customer funds totalled €400.7 billion at 30 June 2020 (+4.3% in the year and +6.4% in the quarter), driven by strong growth in demand deposits. Households and businesses alike have been managing their liquidity needs and the customary seasonal effect of double salary payments in the second quarter of each year also affects the performance of this heading.

Assets under management were down in the year to €98.6 billion, largely due to the negative performance of the markets, although the second quarter saw a recovery of sorts to enable quarterly growth of 6.7%.

Total liquid assets amounted to €106.6 billion, marking an all-time high for the Bank, up €17.2 billion in the year, largely due to the generation and provision of collateral to the ECB facility.

As for capital management, the Common Equity Tier 1 (CET1) ratio stands at 12.3%. The ratio rose by 32 basis points in the first half of the year due to the extraordinary impact of the decision reached by the Board of Directors to lower the dividend against 2019 earnings in response to COVID-19, and also gained a further 48 basis points due to the application of the transitional period under IFRS 9. Organic capital generation remained stable. The dividend outlook for the year has an impact of -6 basis points, while market conditions and other factors have an impact of -49 basis points.

As for the MREL requirement (22.7% of RWAs as of 31 December 2020), CaixaBank had an RWA ratio of 23.3% at 30 June, including the issuance this month of a social bond worth €1 billion in a bid to mitigate the impact of COVID-19 by financing SMEs and micro-enterprises located in the most underprivileged areas of Spain.

Containment of the NPL ratio through sound risk management

The NPL ratio fell to 3.5% (-6 basis points), while the coverage ratio climbed to 63% (+8 percentage points in the year following further loan-loss charges posted by the Bank). Cost of risk at 12 months was 0.61%.

Since the onset of the COVID-19 crisis, in addition to the various moratoria and credit facilities, CaixaBank has rolled out a raft of measures under the hashtag #WithYouNowMoreThanEver, in a bid to cushion the economic and social impact of the crisis and thus support the needs of the most affected segments of society. These measures include:

In Portugal, BPI has taken similar steps in response to the current social climate and to support the Portuguese economy.

CaixaBank has also received the “Excellence in Leadership in Western Europe 2020” from British magazine Euromoney for its commitment to people and society in the wake of the COVID-19 crisis. 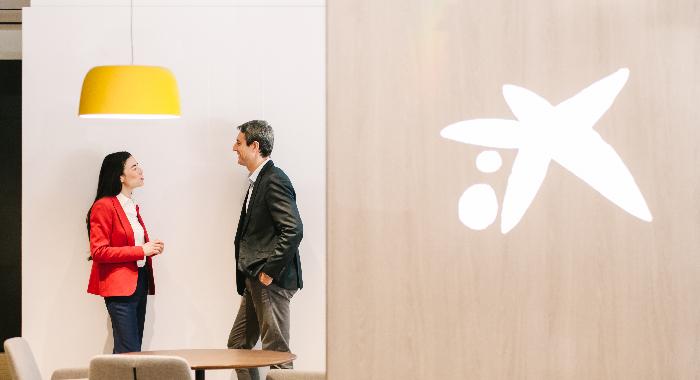 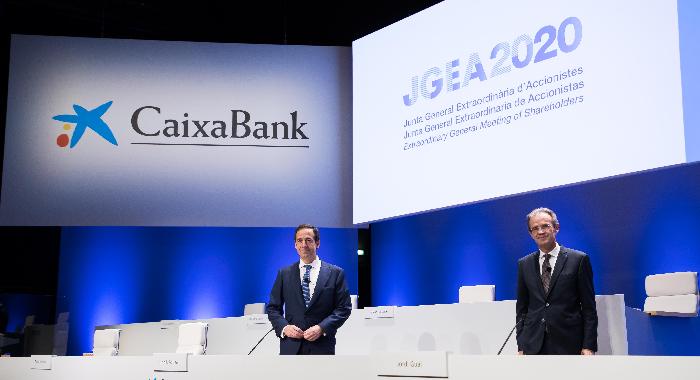